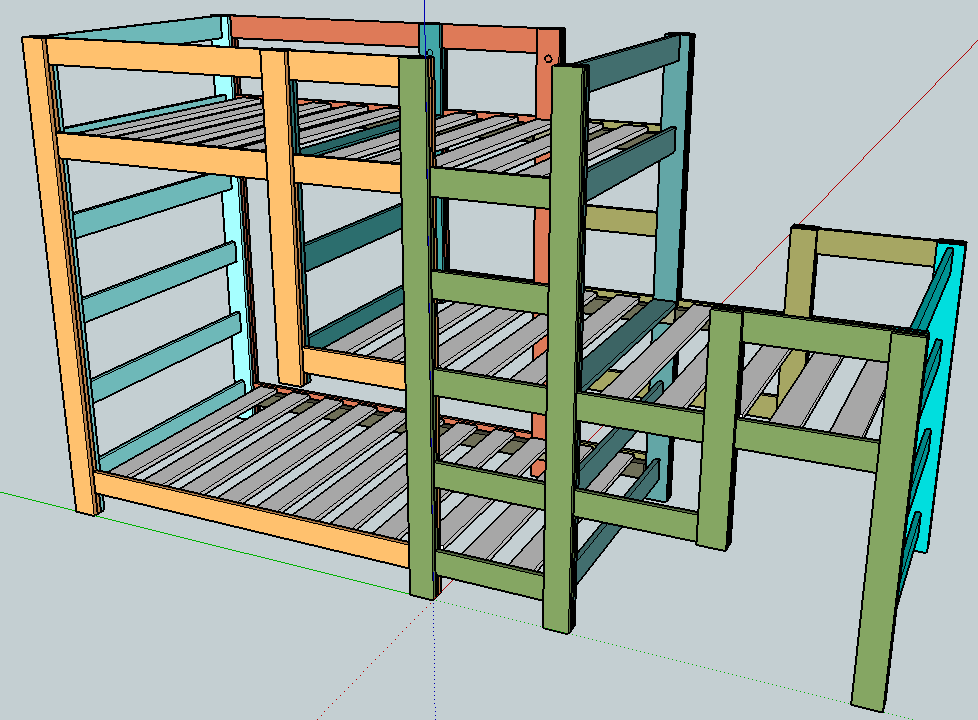 This Triple Bunk Bed plan is a staggered design with the middle bunk offset. This allows it to fit under the common 8 foot ceiling height without compromising head room, by assuming half of the bed is for the footer and does not require as much height.

Despite the overall size of the project, it uses very simple construction methods. All cuts are right angles, and all screws go strait through flat surfaces. The biggest challenge is getting everything square, and simply getting all of the pieces organized for assembly.

This plan is based on the Classic Bunk Beds at ana-white.com. If any of these instructions don’t make sense, read through that plan for a better understanding.

The finished bed disassembles into 8 main sections, plus the mattress support slats. Overall dimensions are just under 10′ by 3’8″ by 6′ tall.

Note: The quantity of 52 is an estimate based on total footage required. This will allow approximately 8″ of waste per 8′ board. Increasing this to 54 allows for up to 11″ of waste per board. Remember to cut the longest pieces first.

Build the end pieces. One is full height, the other is for the mid bunk end.

With the cross rails centered on the face of the verticals, there will be 1 3/8” on either side.

Pre-drill through the verticals and attach to the cross rails using 2” screws, and glue.

Build the 2 inner cross sections. There is one full height, and one hanging section. 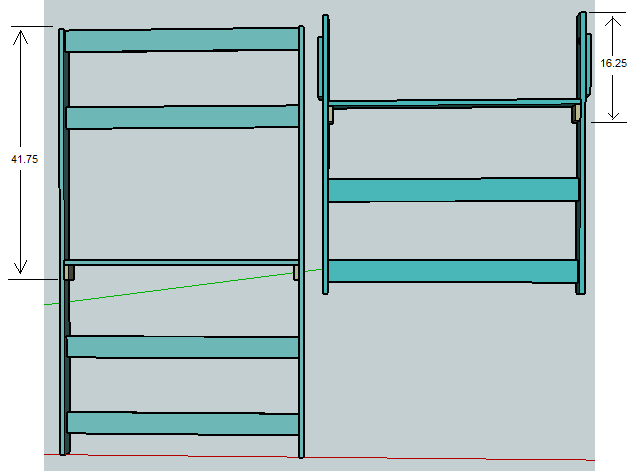 These cross sections each have one rail that is installed flat, that will end up being one of the mattress supports. A 2½” piece of 1×4 should be glued and screwed into the vertical directly below the flat cross piece on each side for extra support. Attach the supports for the flat rails as shown, by aligning with the bottom of each rail. The top of the flat rail will be ¼” lower than the matching cross rail (comparing to the end pieces).

Pre-drill through the verticals and attach to the cross rails using 2” screws, and glue. Use 1¼” screws for the small support pieces under the flat rails.

The hanging cross section should have a 1” hole drilled just below the top safety rail (4½” from the top), where the bolt will go that connects the main pieces together. This is to allow the nut on the assembly bolt to be countersunk to keep it safely away from the person in the top bunk. The upper filler pieces, which are attached to the outside verticals in most places, are attached to these verticals as shown, 3½” from the top. At least 2 screws should be used near the 1” hole. The bolt will grab the surface of the filler piece when assembled, so this piece must be secured to the vertical with both screws and glue.

Build the front and back double sections. These pieces need to be mirror images of each other.

On the inside vertical, which goes next to the ladder, a 1” hole similar to the hanging cross piece is needed, along with the filler piece being attached to the inside rail 3½” below the top, using screws and glue.

For all of the other filler pieces, 1¼” nails with glue can be used in place of screws to make assembly a little faster, since these pieces will not be subject to lateral stress. All nails and screws should go through the filler into the vertical to keep the heads hidden.

Start by laying the two outside verticals on the floor, and lay the rails on top. After attaching, flip it over to attach the inside vertical. 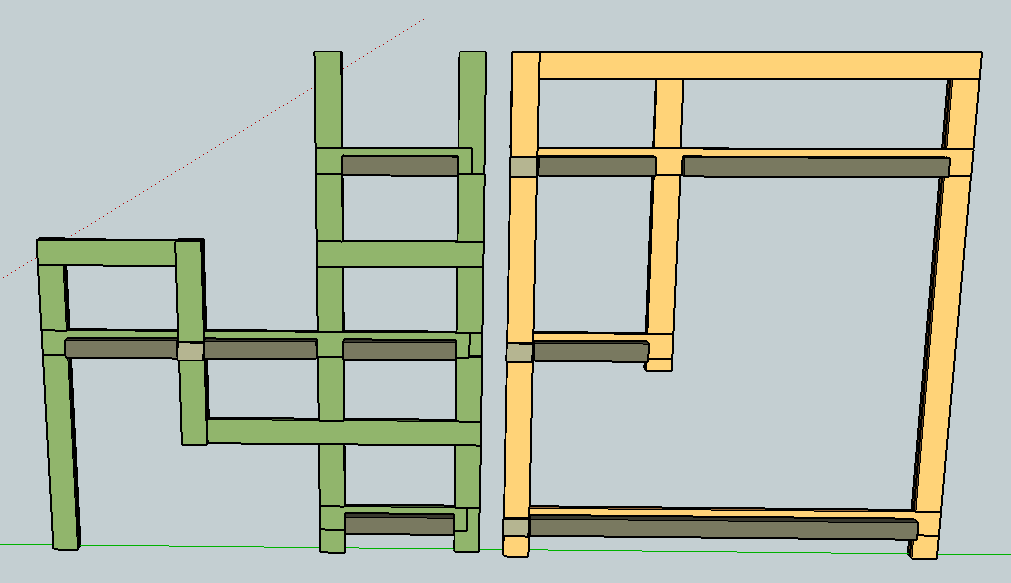 Build the front and back single/ladder sections. These pieces are also mirror images of each other.

Make marks on the verticals at the same spacing as the double front/back sections.

On these pieces, all of the main verticals are on the outside of the rails. There is a second vertical on the hanging support that goes inside the rail, which should be attached last. This inside vertical can be attached with finish nails and glue rather than screws, since the screw heads would remain visible, and this piece is less structurally critical.

Attach the 2×3 slat supports to all 4 front and back sections, using 2½” screws and glue

Also attach 2½” inch sections of 1×4 to the inside verticals as shown to align with the 2×3 supports. There are 3 on each double section, and 1 on each single/ladder section.

Drill the bolt holes. Bolts holes should be drilled about 1” below each bed rail, plus one below the top safety rail. This will place the nuts in a safe position directly below the cross rails. That is 4 bolts each in the 3 full height verticals (2 cross sections and the ladder overlap), and 3 bolts each in the 2 short verticals.

Clamp 2 sections at a time together in their final position, and drill through both sections at once.

Connect the slats together. Although the slats could be screwed to the slat supports after assembly, that would eliminate the ability to easily disassemble the bed. By simply be attaching the slats to each other, it will maintain spacing and still be easy to remove.

The slats for each bunk should be connected together in two groups, since the top bunks have a built-in slat in the middle. Lay a yard of cloth across 5 slats, properly spaced (about 3¼” between them) and staple to the slats. Four of the 6 groups will have a shorter piece in the middle. One will need 6 slats, all full length.

Or, as an alternative to cloth, use 2 extra 1x strips about 32” long for each half, perpendicular to the slats, and screw into the slats (these 1x’s will need to be on the bottom of the slats when in use).

For the best view of the project, install the Sketchup program and download the Sketchup file for this project. Then you can pull the pieces apart, rotate around it, and even customize it for your needs.